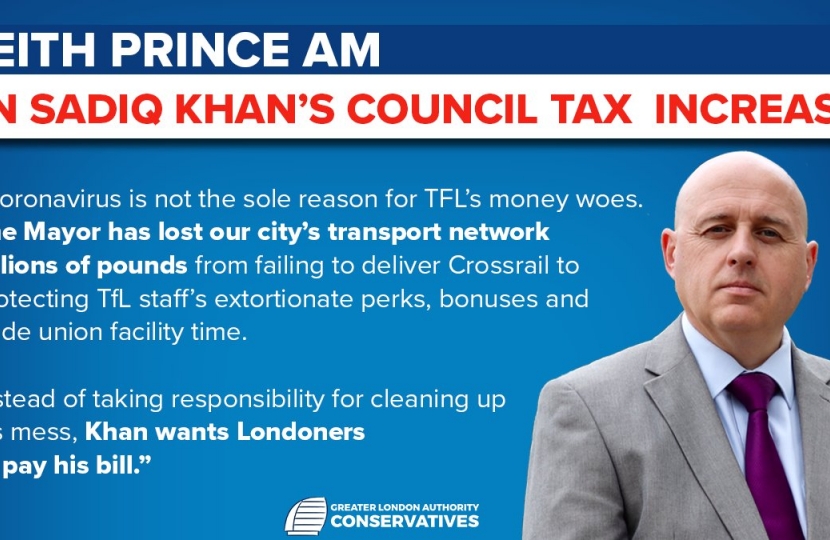 "After wrecking Transport for London's finances for the past five years, Sadiq Khan is passing the bill onto Londoners. With many people struggling during this crisis, the Mayor’s choice will hurt the poorest Londoners the most.

"The Mayor is misleading Londoners by claiming he had no choice but to increase his share of their council tax bill. Sadiq Khan refused to consider cutting waste at TfL and more creative ways to raise money like Tube sponsorship to help pay for these concessions.

"Coronavirus is not the sole reason for TfL's money woes. The Mayor has lost our city's transport network billions of pounds from failing to deliver Crossrail to protecting TfL staff's extortionate perks, bonuses and trade union facility time. Instead of taking responsibility for cleaning up his mess, he wants London to pay his bill.

"Sadiq Khan's decision to continue his Congestion Charge hike is a hammer blow for central London's struggling businesses. After lockdown, it's the Mayor's duty to get London moving to kickstart our economic recovery. Khan's decision today shows he will be ducking that responsibility as well."

Yesterday at Loxford School, in Ilford, we all came together as a community to celebrate Navratri. I'd like to thank East London and Essex Hindu Social Club for hosting the event which raises so much money for charities, this years chosen charity is Great Ormond Street Hospital.